America East to West. We visit, We record, We present, You Enjoy! More
* These are 13 yrs 1 mths old memories. People may change, feelings & memories don’t *
Description - Published on 12/26/2009
* Use external speakers or headset to enjoy more
Please help your folks/friends to know about these places/events/cultures
Enjoy the content and common music even if few songs are in regional language.
* Help required with nice background music(movie or others) of any language * Hide
Thanks to all the people who are supporting/advising and helping with improvements!

Welcome to the International Society for Krishna Consciousness (ISKCON) of Houston. Goal is to present you with a wonderful spiritual experience, establish and nurture a loving, spiritual relationship with God and other devotees as intended by His Divine Grace A. C. Bhaktivedanta Swami Prabhupada.

In the Krishna Consciousness movement, a chance is given to everyone regardless of their caste, creed or color. Everyone is invited to join , chant , dance w and hear the glories of Krishna.

Future Home of Sri Sri Radha Nila-Madhava is under construction.

The BAPS Shri Swaminarayan Mandir in Houston is the first traditional Hindu Mandir of stone and marble to be constructed in the US. Created entirely according to ancient Hindu architectural manuscripts known as the Shilpa-Shastras and meeting all the modern regulations of today, it was constructed in a mere 16 months starting from the day its first stone was laid. Limestone from Turkey and marble from Italy was shipped to India where it was hand-carved. More than 33,000 carved pieces were shipped from India to Houston to build such a beautiful Mandir. The Mandir opened to devotees, well-wishers, and visitors after the Pran Pratishtha ceremony performed by His Divine Holiness Pramukh Swami Maharaj on July 25, 2004.

Chinmaya Mission Houston (CMH) was established in 1982 and has since evolved into a dynamic Hindu organization serving several hundred families. The Mission is dedicated to spreading the knowledge of Vedanta and other Hindu scriptures.

Sri Saumyakasi Sivalaya is the first free standing Siva temple of its kind in Houston . The new 4,000-square feet house of worship was inaugurated on December 18, 2007 and is an integral part of the Chinmaya Prabha facility in Sugar Land, Texas.

Sri Meenakshi Temple located in Pearland, TX, a suburb of Houston, prevails as the third Hindu temple built in the US since the 1970s, the peak of the Hindu immigrant settlement in the USA. This temple is dedicated to Goddess Meenakshi, the only temple for the Goddess off the shores of India. However, in keeping with the spirit of Hindu civilization, viz., "Unity in Diversity" with so many religious paths, gods, sects and yet a single substratum "Brahman" (the single Godhead) activating this diversity, the temple is also dedicated to Lord Sri Sundareswara, or Lord Siva of the Saivite tradition. To meet the diverse needs of the Hindu population, the Vaisnava tradition of worship is also celebrated and the temple is also dedicated to Lord Venkateswara (Sri Balaji), a form of Lord Vishnu. Thus this temple has become a confluence of the several traditions of worship, the Saivaite, the Vaishnavite, the worship of Lord Ayyappa, Devi Kannika Parameshwari, Lord Ganesha, Hanumaanji and several other deities - an affirmation of the theological "Unum" of the Vedas seen by devotees as many manifest forms - "Ekam Sat Viprah Bahudah Vadanthi" - "Truth is One, the wise speak of that One in many ways".  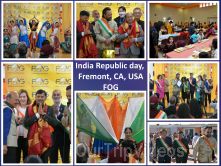