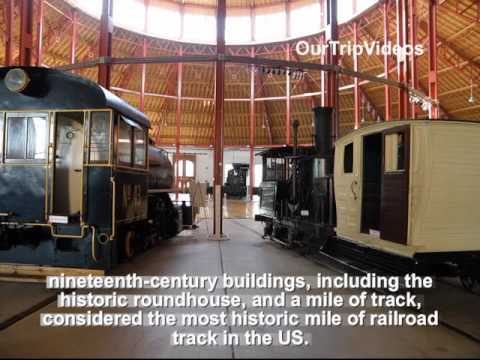 The Birthplace of American Railroading!

Veterans Day Weekend at the Museum - Salute the military and veterans at the B & O! - special living history presentations by members of the 4th Infantry Division Military Police Unit on our WWII Troop Sleeper. Vintage military vehicles will also be on display.


Welcome to Americas Railroad Museum! Where Americas most important, historic and comprehensive collection lives to tell the story of railroading every day. Forty acres of heritage and a world class collection await your discovery!

The Baltimore and Ohio Railroad Museum possesses the oldest, most historic and most comprehensive American railroad collections in the world. Dating from the beginning of American railroading, the collection contains locomotives and rolling stock, historic buildings, and small objects that document the impact of the Baltimore and Ohio Railroad (B & O) on the growth and development of early railroading and cover almost every aspect of an industry that left a permanent mark on the folklore and culture of America.

In Association with the Smithsonian Institution.

Train rides are offered Wednesday through Sunday, April through December and weekends in January . Train rides are subject to change or cancellation without notice and are not guaranteed with your visit.

The B & O Railroad Museum is a museum exhibiting historic railroad equipment in Baltimore, Maryland, originally named the Baltimore and Ohio Transportation Museum when it opened on July 4, 1953.

It has been called one of the most significant collections of railroad treasures in the world and has the largest collection of 19th century locomotives in the U.S.

The museum is located in the Baltimore and Ohio Railroads old Mount Clare Station and adjacent roundhouse, part of the B & Os sprawling Mount Clare Shops site begun in 1829, the oldest railroad manufacturing complex in the US.

Mount Clare is considered to be a birthplace of American railroading, as the site of the first regular railroad passenger service in the U.S., beginning on May 22, 1830.

It was also from this site that the first telegraph message, What hath God wrought? was sent on May 24, 1844, to Washington, D.C., using Samuel F. B. Morses invention.

The museum houses collections of 19th- and 20th-century artifacts related to Americas railroads.

The collection includes 250 pieces of railroad rolling stock, 15,000 artifacts, 5000 cubic feet (140 m3) of archival material, four significant nineteenth-century buildings, including the historic roundhouse, and a mile of track, considered the most historic mile of railroad track in the US.

In 2002, the museum had 160,000 visitors annually. The museum also features an outdoor G-scale layout, an indoor HO scale model, and a wooden model train that children will enjoy climbing on.

From Thanksgiving through the New Year, local model railroad groups set up large layouts on the roundhouse floor and in select locations on the grounds of the museum. A museum store offers toys, books, DVDs and other railroad-related items.


The museum and station were designated as a U.S. National Historic Landmark in 1961. Television and film actor Michael Gross is the museums celebrity spokesman.

Add few more dollars to any admission price and visit both of the B & O Railroad Museums for one low price! The discounted combination ticket offers visitors admissions to both the Baltimore and Ohio Railroad Museum and the Ellicott City Station valid for 6 months from the date of purchase.

The B & Os station in Ellicott City, Maryland, also part of the museum, is the oldest surviving railroad station in America. The Main Depot building was completed in 1830-1831 by the Baltimore and Ohio Railroad. The site also includes the 1885 freight house, a replica of the first horse-drawn passenger rail car, and a 1927 I-5 caboose. Exhibits highlight the people who built and operated Americas first railroad, the role of the railroad in the Civil War, and the changes wrought by the development of rail transportation.

The freight house features a 40-foot HO-gauge model train layout showing the first 13 miles (21 km) of commercial rail track between Baltimore and Ellicott Mills, as Ellicott City was then known. The museum also offers living history programs. Beginning in March, 2006, members of the B & O Railroad Museum in Baltimore are entitled to visit the Ellicott City Station free of charge.