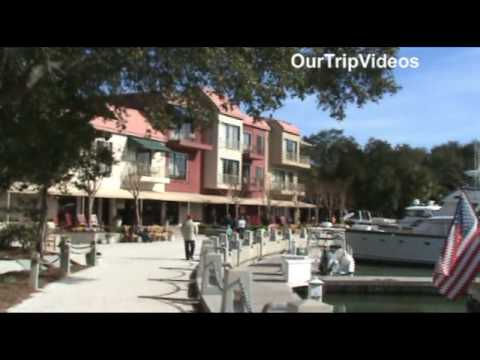 The island features 12 miles (19 km) of beachfront on the Atlantic Ocean and is a popular vacation destination.

In 2004, an estimated 2.25 million visitors pumped more than $1.5 billion into the local economy.

The island has a rich history that started with seasonal occupation by native Americans thousands of years ago, and continued with European exploration and the Sea Island Cotton trade.

Once the island fell to Union troops, hundreds of ex-slaves flocked to Hilton Head, which is still home to many native islanders, many of whom are descendants of freed slaves known as the Gullah.

However, the Town maintains several public beach access points, including one for the exclusive use of town residents

Hilton Head Island offers an unusual number of cultural opportunities for a community its size.

It also hosts the Verizon Heritage, a stop on the PGA Tour which is played on the Harbour Town Golf Links in Sea Pines Resort.

The Coastal Discovery Museum offers a variety of programs, activities, and indoor and outdoor exhibits year-round to over 125,000 visitors.

The Hilton Head Island area is home to a vast array of wildlife, including alligators, deer, Loggerhead Sea Turtles, hundreds of species of birds, and dolphins.

It is the second most populous city in South Carolina closely behind the state capital Columbia.

The city of Charleston is located just south of the mid-point of South Carolinas coastline, at the junction of the Ashley and Cooper Rivers.

Americas most-published etiquette expert, Marjabelle Young Stewart, has recognized the city since 1995 as the best-mannered city in the U.S

By the mid-18th century Charleston had become a bustling trade center, the hub of the Atlantic trade for the southern colonies, and the wealthiest and largest city south of Philadelphia.

On January 9, 1861, Citadel cadets fired shots of the American Civil War when they opened fire on the Union ship Star of the West entering Charlestons harbor.

On April 12, 1861, shore batteries under the command of General Pierre G. T. Beauregard opened fire on the Union-held Fort Sumter in the harbor.

In 1865, Union troops moved into the city, and took control of many sites, such as the United States Arsenal, which the Confederate army had seized at the outbreak of the war

The city is well-known for its streets lined with grand live oaks draped with Spanish moss, and the ubiquity of the Cabbage Palmetto, which is the state tree of South Carolina.

Along the waterfront in an area known as Rainbow Row are many beautiful and historic pastel-colored homes.

It is also the second most productive port in the world behind Hong Kong.

Charleston is becoming a prime location for information technology jobs and corporations, most notably Blackbaud, Modulant, CSS, Benefitfocus, and Google.

The aerospace industry is beginning to establish itself with the joint venture plant of Vought and Alenia Aeronautica, where two of the five sections of the Boeing 787 fuselage are fabricated and assembled.

Charleston is the primary medical center for the eastern portion of the state.

The other attractions are :
A historic home on The Battery.
Confederate Memorial at White Point Gardens.
Rainbow Row
Daughters of the Confede
racy Building, near Charlestons downtown open market.
The new Arthur Ravenel, Jr. Bridge, constructed in 2005, is the longest cable-stayed bridge in the Western Hemisphere.
Charleston Place on King Street
SC State Arsenal (Old Citadel), adjacent to Marion Square