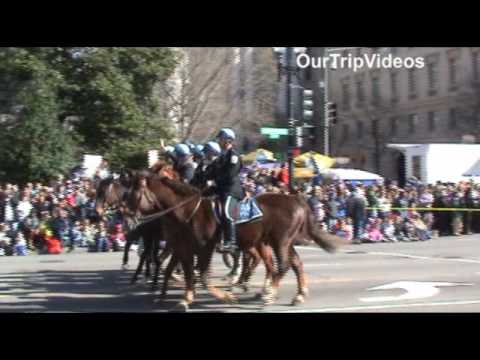 The National Cherry Blossom Festival Parade is one of Washington, DCs largest public events of the year, drawing about 100,000 spectators from around the world.

The parade is simulcast live on ABC 7/ WJLA-TV and NewsChannel 8.

Following the parade is the Sakura Matsuri Japanese Street Festival from 11 a.m. to 6 p.m. Don't miss the biggest Japanese street party in the nation.

The parade passes many Washington, DC attractions - National Archives, the Department of Justice, Smithsonian Museums, the Washington Monument and the White House

This is one of the biggest events of the year and parking is extremely limited. The best way is by Metro. The closest Metros are Archives/Navy Memorial, Federal Triangle and Smithsonian

The parade is free and open to the public. You may purchase a reserved grandstand seat. The Madame Tussauds wax museum is offering free admission and VIP access to all grandstand seating ticket holders.

This years opening production welcomes a cast of over 200 performers, including 100 students from different schools.

Back by popular demand, characters from Sesame Place including everyone's favorite furry red friend Elmo return for their second appearance.

Rounding out the entertainment, the All-Star Tap Team and Youth Choir together will showcase the talent of nearly 1,500 members from around the country

Local and other crowd favorites will energize onlookers while marching bands and wow the crowd.

Floats feature the NCBF Goodwill Ambassadors and cherry blossom princesses among others.