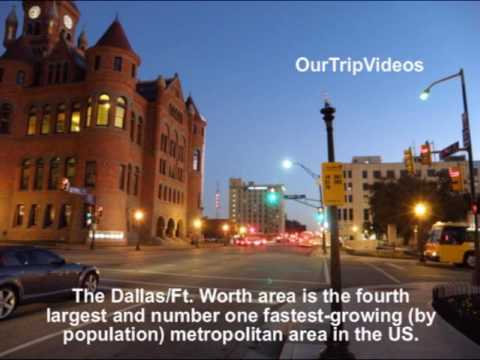 Dallas, the third largest city in Texas and the center of the states largest metropolitan area, is in the north central portion of the state. This populous city is home to the Dallas Cowboys and youll regularly be reminded of the citys mass enthusiasm for the team. A shoppers paradise, Dallas has more shopping centers per capita than any other city in the US. It is uncertain whether the city was named after George Mifflin Dallas, the U.S. Vice President under James Knox Polk.

The Dallas/Ft. Worth area is the fourth largest and number one fastest-growing (by population) metropolitan area in the US.

The city is sometimes referred to as the heart of Silicon Prairie because of a high concentration of telecommunications companies in the region, the epicenter of which lies along the Telecom Corridor located mostly in Richardson, a northern suburb of Dallas.

Dallas is rated as a beta world city by the Globalization and World Cities Study Group & Network.

The citys prominence despite this comes from its historical importance as a center for the oil and cotton industries, its position along numerous railroad lines, a strong industrial and financial sector, and its status as a major inland port (due largely to the presence of Dallas/Fort Worth International Airport, one of the largest and busiest in the world).

* The Sixth Floor Museum, dedicated to the assassination of President John F. Kennedy, is located downtown in the same building from which Lee Harvey Oswald allegedly fired the shots.
Http://www.jfk.org/

* Dallas Museum of Art - Great works of art from eastern and western cultures, from all ages.
Http://www.dm-art.org/index.htm

- Big Tex at the State Fair of Texas.
- Reunion Tower and the Trinity Railway Express.
- The spring and fall seasons are pleasant in Dallas, as seen in this March photograph from an Oak Cliff park.
- Snow on the campus of Southern Methodist University in nearby University Park.
- Dallas skyline from the Trinity River floodplain.
- American Airlines Center in Victory Park.
- The OU/TX Red River Shootout in 2006.
- White Rock Lake.