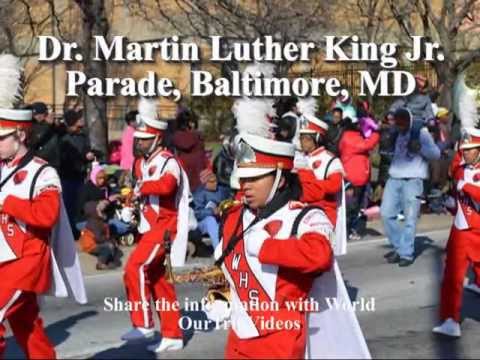 Martin Luther King, Jr. (January 15, 1929 - April 4, 1968) was an American clergyman, activist, and prominent leader in the African-American Civil Rights Movement. He is best known for his role in the advancement of civil rights in the US and around the world, using nonviolent methods following the teachings of Mahatma Gandhi. King has become a national icon in the history of modern American liberalism.

In 1964, King became the youngest person to receive the Nobel Peace Prize for his work to end racial segregation and racial discrimination through civil disobedience and other nonviolent means.

King was assassinated on April 4, 1968, in Memphis, Tennessee. He was posthumously awarded the Presidential Medal of Freedom in 1977 and Congressional Gold Medal in 2004; Martin Luther King, Jr. Day was established as a U.S. federal holiday in 1986.


Residents of Baltimore and surrounding areas are invited to take part in the annual Dr. Martin Luther King, Jr. Parade which celebrates the life of one of Americas most influential civil rights, political and social icons.

More than 55 organizations from the across the mid-Atlantic region participate in the parade, such as high stepping marching bands, honor and color guards, equestrian units, colorful cheer and dance squads, decorative floats, military groups and civic organizations.