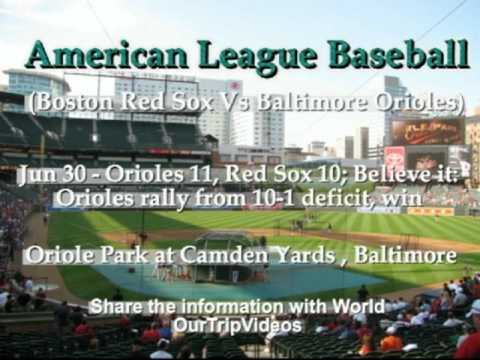 The American League(AL), is one of 2 leagues that make up MLB. The league is often called the Junior Circuit.


Oriole Park at Camden Yards is a ballpark located in Baltimore, MD, which was completed in 1992 to replace Memorial Stadium. It is the home field of the Baltimore Orioles of MLB.

It was the first of the retro major league ballparks constructed during the 1990s and early 2000s, and remains one of the most highly praised.

Historically, it is one of several venues that have carried the Oriole Park name for various Baltimore franchises over the years. The park is typically known in short as Camden Yards.


The American League(AL) of Professional Baseball Clubs, is one of 2 leagues that make up MLB in the USA and Canada.

It developed from the Western League, a minor league based in the Great Lakes states, that eventually aspired to major league status.

The AL champion plays in the World Series against the National League champion after the end of every season.

Through the 2008 season, American League teams have won 61 of the 104 World Series played since 1903, with 26 of those coming from the New York Yankees alone.

The New York Yankees have won 39 American League titles, the most in the leagues history, followed by the Oakland Athletics (15) and the Boston Red Sox (12).

The other, Section 86, Row FF, Seat 10 in the left field bleachers, was the landing spot for Ripkens 278th home run as a shortstop, breaking Chicago Cubs legend Ernie Bankss record for the position.

The only no-hitter thrown at Camden Yards to date was tossed by Hideo Nomo, then with the Boston Red Sox, on April 4, 2001.

George Herman Ruth, Jr., also popularly known as Babe, The Bambino, and The Sultan of Swat, was an American MLB player from 1914 - 1935.

Ruth is one of the greatest sports heroes of American culture. Ruth was born at 216 Emory Street in Pigtown, a rough neighborhood of Baltimore, MD.

The Boston Red Sox are a member of the MLBs American League Eastern Division.

Since 1912, the Red Soxs home ballpark has been Fenway Park. The Red Sox name originates from the iconic uniform feature.

The club was founded in 1901, as one of the ALs 8 charter franchises. They were a dominant team in the new league - defeating the Pittsburgh Pirates in the first World Series in 1903.

They won 4 more championships by 1918, and then went into one of the longest championship droughts in baseball history, which ended in 2004, when the team won their sixth World Series Championship.

Since 2003, the Red Sox have competed in 4 ALCS, have won 2 World Series, and have emerged as arguably the most successful MLB team of the last decade.

The Red Sox led all MLB teams in average road attendance in 2007, while the small capacity of Fenway Park caused them to rank 11th in home attendance.


The Baltimore Orioles are a professional baseball team based in Baltimore.

The Orioles name refers to the official state bird of Maryland. Nicknames for the team include the Os and the Birds.

One of the ALs 8 charter franchises, it was established as a major league club in Milwaukee, Wisconsin in 1901.

The Milwaukee Brewers, as they were originally known, moved to St. Louis in 1902 and became the St. Louis Browns.

After spending 52 years in St. Louis, the Browns moved to Baltimore in 1954 and adopted the Orioles name.

They won 3 straight pennants, and participated in all 4 of the Temple Cup Championship Series, winning the last 2 of them.

That team had started as a charter member of the American Association in 1882. Despite its on-field success, it was one of the 4 teams contracted out of existence by the NL after the 1899 season.

Its best players regrouped with the Brooklyn Dodgers, turning that team into a contender.

In 1901, Baltimore and McGraw were awarded an expansion franchise in the growing AL, but again the team was sacrificed in favor of a New York City franchise, as the team was transferred to the city in 1903.

After some early struggles, that team eventually became baseballs most successful franchise - the New York Yankees.

As a member of the high-minor league level International League, the Orioles competed at what is now known as the AAA level from 1903-1953.

Baltimores own Babe Ruth pitched for the Orioles before being sold to the AL Boston Red Sox in 1914.

The Orioles of the IL won 9 league championships, first in 1908, followed by a lengthy run from 1919 to 1925, and then dramatically in 1944, after they had lost their home field Oriole Park in a disastrous mid-season fire.

The huge post-season crowds at their temporary home, Municipal Stadium, caught the attention of the big league brass and helped open the door to the return of MLB to Baltimore.

On June 30, 2009, the Orioles set a record for the largest comeback in franchise history with an 11-10 win over the Boston Red Sox.

It also set a MLB record for the largest comeback by a last place team over a first place team.

The Orioles rallied to score 10 runs after facing a 10-1 deficit in the 7th inning.


In the 2006 World Baseball Classic, the Orioles contributed more players than any other major league team, with 11 players suiting up for their home nations.

For 23 years, Rex Barney was the PA announcer for the Orioles.

His voice became a fixture of both Memorial Stadium and Camden Yards, and his expression Give that fan a contract, uttered whenever a fan caught a foul ball, was one of his trademarks - the other being his distinct Thank Yooooou... following every announcement

Of the 8 original American League teams, the Orioles were the last of the 8 to win the World Series, doing so in 1966 with its four - game sweep of the heavily favored Los Angeles Dodgers.

When the Orioles were the St. Louis Browns, they played in only one World Series, the 1944 matchup against their Sportsmans Park tenants, the Cardinals.