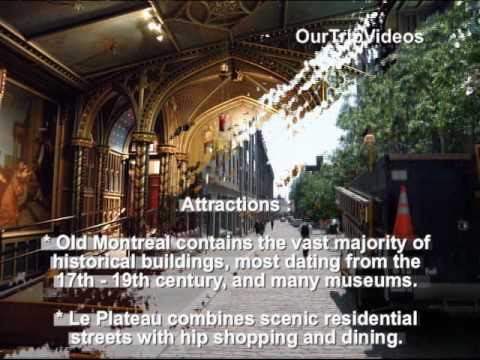 Montreal - the metropolis of the province of Quebec. Quebec City is the political capital but Montreal is the cultural and economic capital of Quebec and the main entry point to the province. The second largest city in Canada, it is a city rich in culture and history, has an inordinate number of attractive, fashionably dressed people, and a well-deserved reputation as one of the liveliest cities in North America. Montreal is the 3rd largest French-speaking city in the world, behind Paris and Kinshasa.

Situated on an island in the St. Lawrence River at the historically highest navigable point, Montreal has been a strategic location since before the arrival of Europeans in Canada.

It has been said that Montreal is the only city in the world where the sun rises in the south. Dont try to navigate by looking at the sun!

* Old Montreal contains the vast majority of historical buildings, most dating from the 17th - 19th century, and many museums.

* Parc Jean-Drapeau, site of the 1967 Worlds Fair, now devoted to green spaces and a large outdoor concert venue. The Gilles Villeneuve racing circuit, home of the Montreal Formula 1 Grand Prix. An artificial beach, a huge outdoor pool complex, and the Montreal Casino are also located on or around the park.

Notre-Dame Basilica is a basilica in the historic district of Old Montreal. The churchs Gothic Revival architecture is among the most dramatic in the world; its interior is grand and colourful, its ceiling is coloured deep blue and decorated with golden stars, and the rest of the sanctuary is a polychrome of blues, azures, reds, purples, silver, and gold.

It is filled with hundreds of intricate wooden carvings and several religious statues. Unusual for a church, the stained glass windows along the walls of the sanctuary do not depict biblical scenes, but rather scenes from the religious history of Montreal. It also has a Casavant Freres pipe organ, which comprises four keyboards, 97 stops, over 9000 individual pipes and a pedal board.

* St. Josephs Oratory Atop of Mount-Royal, it is one of the worlds most visited shrines. The basilicas huge dome reaches 97 meters and is second only in height to Saint-Peters basilica in Rome.

* The dome of the Marche Bonsecours in Old Montreal

* The Biosphere, a geodesic sphere on the grounds of the 1967 Worlds Fair

* Mount Royal Park - The scenic lookout offers a striking view of the downtown area and the river.

* Olympic Stadium, home of the former Montreal Expos. Olympia Park Built for the 1976 Summer Olympics Games. Impressive in size and shape and topped b the tallest inclined tower in the world.

* Botanical Gardens and Insectarium A future visit is a must.

* St. Helens Island and the Casino A superb panoramic view.

*** Rideshare - Save money with a rideshare. There are daily rides from Toronto to Montreal and back for $30-50.

*** Poutine - No visit to Montreal is complete without at least one plate of poutine (possibly from a French word meaning mess).