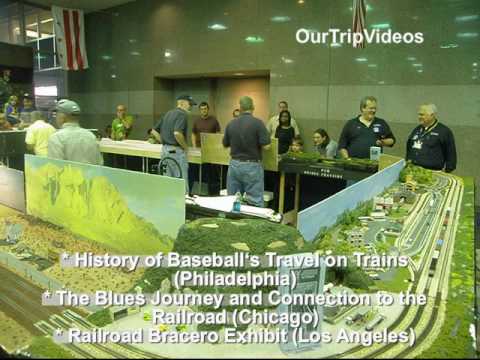 Amtrak hosted the annual National Train Day on May 8, 2010, with events across the country to celebrate Americas love for trains. National Train Day commemorates the 141st anniversary of the first transcontinental railroads inception by bringing to life the rich narrative of how trains transformed America. Large-scale, family-friendly events will be held in Washington, D.C., Philadelphia, Chicago and Los Angeles.

As the nations intercity passenger rail operator, Amtrak connects America in safer, greener and healthier ways. Last fiscal year, the railroad carried 27.2 million passengers, making it the second-best year in the companys history. With 21,000 route miles in 46 states, the District of Columbia and three Canadian provinces, Amtrak operates more than 300 trains each day at speeds up to 150 mph to more than 500 destinations. Amtrak also is the operator of choice for state-supported corridor services in 15 states and for four commuter rail agencies.

This Day celebrates the trains impact on our country and provides an opportunity for Americans to further understand the influence rail has on the future of transportation in America. With a greater national focus on energy efficiency in travel, trains are already a leading alternative with 20 percent more fuel efficiency than commercial airlines and 28 percent more efficiency than car travel per passenger mile.

In addition, local communities across the country are encouraged to develop and host their own National Train Day celebrations. More than 140 local celebrations took place in 2009 and Amtrak expects even more in 2010.

Come on down to the station and join the celebration in Washington, D.C.! Dont miss your chance to see model trains, train equipment displays and much more:

*Stop by this exhibit and get your National Train Day Passport stamped. Passports will be provided at Union Station. Be sure to pick one up.

Take Advantage of these Special Offers:

* Baltimore & Ohio Railroad Museum: offer discounted tickets.
* Delaware Center for the Contemporary Arts: Get a 10 percent discount in the DCCA museum store.
* DC National Aquarium: Get one Free Childs Admission.
* Madame Tussauds D.C. will offer a Buy One Ticket Get One Free.

Most major market events will also feature experiential exhibits that narrate each regions rich history with trains. These exhibits include: