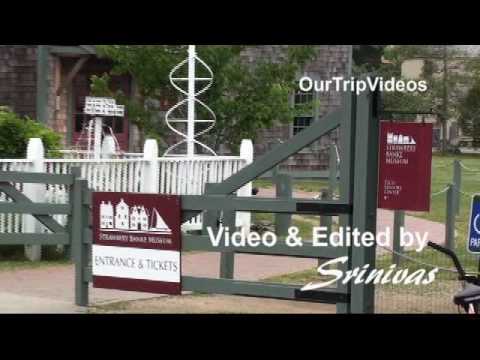 Portsmouth is a city in Rockingham County, New Hampshire in the US. It is the fourth-largest community in the county. A historic seaport and popular summer tourist destination, Portsmouth is served by Portsmouth International Airport at Pease, formerly the Strategic Air Commands Pease Air Force Base.

Portsmouth is the third oldest city in the USA and is prominent in New Hampshires seacoast region.

Settled in 1623, as Strawbery Banke, Portsmouth is a historic seaport that boasts an intriguing mix of the old and the new. As one of the oldest cities in the US, it was founded just 3 years after the settlement at Plymouth MA, the city has a walkable scale that is more often seen in European villages then in US cities.

Strawbery Banke is an historic neighborhood of 42 buildings that have been perserved intact as they were in the 17th and 18th century. This unique outdoor museum affords a rare opportunity to just walk back in time. It features houses that have been restored to a particular point in time, buildings that are used for special exhibits, gardens, and artisans practicing traditional trades.

** Incorporated in 1958
** 37 historic structures; 20 are restored and interpreted to reflect various aspects of community life from 1653-1958.
** Tyco Visitors Center opened in 2005; provides an orientation center for visitors, museum ticketing services, and houses the
Museum Store.
** Carter Collections Center opened in 2007; dedicated to the storage and preservation of the extensive archaeology, decorative arts (from 1653-1958), manuscripts, historic photograph, and archival collections.
** Eight authentic period gardens throughout the site

* Prescott Park.
Located at the edge of the Piscataqua River and across from Strawbery Banke Museum. The popular waterfront park features extensive flower gardens, including large demonstration beds where many varieties of flowers are shown each summer.

The park also is the site of one of New Englands most popular outdoor summer events, the Prescott Park Arts Festival, which during July and part of August presents a musical and dozens of performances by musicians and theater groups.