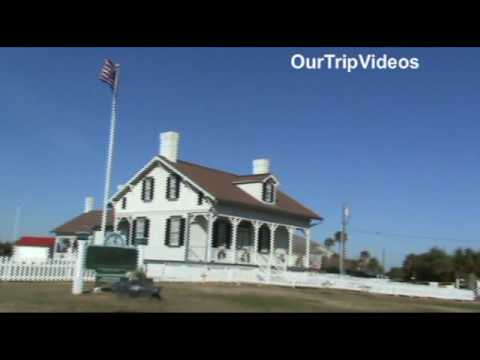 Tybee Island - Tybee means salt to Native Americans, but the name of this resort now brings to mind words such as sun, surf and fun.

Located 18 miles east of Savannah, this small barrier island boasts a wide, 3-mile long beach thats backed by sea oat-covered sand dunes and is perfect for sunbathing, people-watching and frolicking in the waves of the Atlantic Ocean.

The islands south-end pier and pavilion is a splendid venue for strolling above the ocean, people watching and fishing.

Fort Pulaski - The Battle of Fort Pulaski in April 1862 marked a turning point in military history.

Tybee Island Pier and Pavilion - Besides its spectacular view and great fishing location, its also a meeting place used for dances, musical performances and special events. On the premises are picnic tables, snack bar, and public restrooms.

Savannah was established in 1733 and was the first colonial and state capital of Georgia.

Savannah attracts millions of visitors, who enjoy the citys architecture and historic buildings: the birthplace of Juliette Gordon Low (founder of the Girl Scouts of the US), the Telfair Academy of Arts and Sciences (one of the Souths first public museums), the First African Baptist Church , Temple Mickve Israel (the 3rd-oldest synagogue in America), and the Central of Georgia Railway roundhouse complex.

Today, Savannahs downtown area, the Savannah Historic District, is one of the largest National Historic Landmark Districts in the US.

It is the primary port on the Savannah River and is located along the U.S. Intracoastal Waterway.

Due to its proximity to the coast, Savannah experiences milder winters and cooler summers than the Georgia interior.

A container ship leaves the Port of Savannah after passing under the Eugene Talmadge Memorial Bridge and proceeding down the Savannah River past the Savannah Historic District.

In the early years of U.S. history, goods produced in the New World had to pass through ports such as Savannahs before they could be shipped to England.

For years, Savannah was the home of Union Camp, which housed the worlds largest paper mill. The plant is now owned by International Paper, and it remains one of Savannahs largest employers

In 2000, JCB, the third largest producer of construction equipment in the world and the leading manufacturer of backhoes and telescopic handlers, built its North American Headquarters in Savannah

General James Edward Oglethorpe, a philanthropist and a representative of King George II to the American colonies, was sent to create a buffer south of the Savannah River to protect the Carolinas from Spanish Florida and French Louisiana.