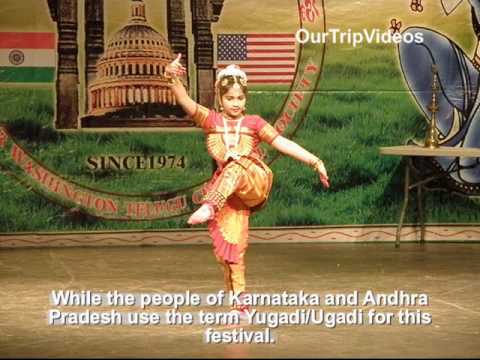 India, officially the Republic of India, is a country in South Asia.

Andhra Pradesh, abbreviated A.P., is a state situated on the south-eastern coast of India. It is Indias 4th largest state by area and 5th largest by population. Its capital and largest city is Hyderabad. The State has the 2nd longest coastline (972 km). Telugu is the 2nd most widely spoken language in India.

It is historically called the Rice Bowl of India. More than 77% of its crop is rice. 2 major rivers, the Godavari and the Krishna run across the state. AP was formed by merging Telugu speaking areas of Hyderabad State and the Telugu speaking part of the Madras Presidency on November 1, 1956.

Yugadi (from yuga + aadi, yuga means era, aadi means start. The start of an era) is the New Years Day for the people of the Deccan region of India. While the people of Karnataka and Andhra Pradesh use the term Yugadi/Ugadi for this festival.

It falls on a different day every year because the Indian calendar is a lunisolar calendar. The Saka calendar begins with the month of Chaitra (March-April) and Ugadi marks the first day of the new year.

The Kannada and Telugu people celebrate the festival with great fanfare; gatherings of the extended family and a sumptuous feast are de rigueur. The day, however, begins with ritual showers (oil bath) followed by prayers, and then the eating of a specific mixture of six tastes, called Yugadi Pachhadi in Telugu and Bevu-Bella in Kannada, symbolizes the fact that life is a mixture of different experiences (sadness, happiness, anger, fear, disgust, surprise) , which should be accepted together and with equanimity.

People traditionally gather to listen to the recitation of the religious Panchangam (almanac) of the new year, and the general forecast of the year to come.

Ugadi celebrations are marked by literary discussions, poetry recitations and recognition of authors of literary works through awards and cultural programs. Recitals of classical Carnatic music and dance are held in the evenings.

The years would have names in Sanskrit. The name of the one that starts on 16 March 2010 is Vikruthi.The one that ended is Virodhi.